Upgrading Ericsson W25 to firmware 11B

November 21, 2008
After long monthes of perfect working, last week my internet connection trough the W25 started to become very unstable, most of the time even not working.
Looking at the statistics it turned out that something hapened in the network, which increased the speed of my connection :-), but after approximately one day, the connection became unstable and was more down that working. 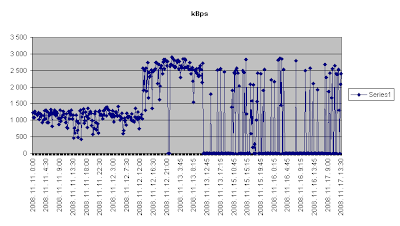 My first guess was, that my operator has upgraded the serving cell from 3,6 Mbps to 7,2 and the 7D firmware I was using may have a bit buggy radio module. So I started the upgrade.
First I have upgraded to 11A, because I have downloaded that already before, and with the bad connection I could not check if there is a better FW available. The upgrade from the WEB UI went pretty smothly, after waiting a lot for checking the radio module FW version, the procedure ended without any problem. I was a bit afraid, that my root password will be changed, but the upgrade behaved correctly and did not change my credientials.
After logging in and trying to test the connection speed, it turned out the wget was removed from the firmware :-( This meant, that from my customizations, DynDNS, speed measurement and daily stock reports in SMS wont work any more. This would have been a pitty, but read on, the problem is fixed by now.
Nexy day I read on the W25 site that there is a 11B realease and from the release notes it looked, that there are a lot of bug fixes and a new radio ROM, so I have upgraded to the new version as well.
This upgrade went smoothly as well, the only thing was was a bit alerting, that it did not wrote anything about the radio firmware upgrade and on the end of the upgrade a new window camu up with a simple "null" text in it. But after restarting everything was ok, both the base and the radio firmware was ok.
Fixing wget
For this I went for the easiest solution I simply copied the wget file from an older firmware version I think it was a 4 or 6 series FW, but it ran without problems on the new version. So I copied it to /root and updated the custom scripts to use it. This fixed all my custom script problems.
Fixing internet problems
It seemed that the new FW did not solve the internet instability problem and from the measurements it looked like the EC/IO value is very fluctuating with this station, so I turned over my external antenna to another station and it seems that this solved the problem. What is a pity, that with the old station after the speed increase I hav speed over 2,5M, with this one I have speeds between 1,5-1,8 M, but this speed is pretty good for a lot of uses and is better to have a stable lover speed connection that a copletely unstable fast connection.
Here is the effect of changing the station: 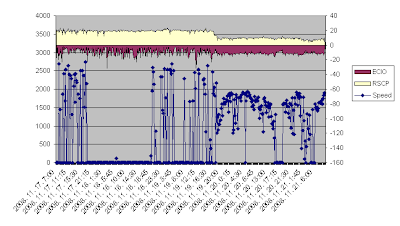 openeyes said…
Hi,
I have a unit that has a Telstra firmware version on it 8A. What do you think about upgrading it to the 11B. I managed to get the root password so i could do it from the commandline but there seems to be some confusion maybe FUD about upgrading from this version. Any feedback? i managed to get the admin doco which helps but provides no insight about thos issue.
Regards
November 28, 2008 at 10:11 AM

Lacó said…
I think that if you have no problem with it, then probably it is better not to upgrade.

In the official W25 site (ericssonw25.com) the description of the upgrade procedure is quite good.

So from 8A you should first upgrade to R9C and then to 11B with the "img" upgrade file.

I did all my upgrades from the web interface and it worked pretty well.

The Telstra firmware version is a bit scarry if it is very special, it may not upgrade to the generic one (at least acccording to the official site www.ericssonw25.com)
November 28, 2008 at 11:47 AM

openeyes said…
I have only had this unit for a day or two and was having a few issues with the unit just slowing down and being somewhat erratic like you have described. I was using a MC8780 in my laptop with similar results. So I thought that it could be more network related. Anyway after combing all the firmware notes it seemed possible enough that I tried an upgrade from 8A. I had firstly reconfigured the unit for all networks as it had been setup just for Telstra. I could not even get a Telstra PrePaid card to connect! I started with the 9C upgrade. This was done from the commandline not the web interface. This went very smoothly. I would note that a working internet configuration was required as some parts are downloaded. I also changed the web address for downloads from the Telstra specified one to ericsson as specified in the admins guide.

But then the tricky bit started. Not happy with my work so far I wanted the newest version. I had 11B ready and after restarting the W25 I initiated the 11B update from the commandline again. All went well unit it went to upgrade the UTMS (ie the MC8775V) radio module. It would shut down the card and then when the SIM card would somehow become none functional. I tried the same process a few times with the same result. I had heard a few people having trouble and then restarting the W25 and then not being able to connect to the unit again. I hesitated and restarted. No problem. Tried the upgrade again - same thing. Since the firmware on the MC8775V was so old I thought it just might be too old to upgrade using this method. I had upgraded my MC8780 when in my Laptop and thought why not open the W25 and take out the MC8775V and put it into my laptop and do the upgrade there.

The only version that I could find in version 2 was 2.0.7.0 for the MC8775 (you can use the AC875U version but not the AC875 aircard version). The only issue here was that the aerial connectors on a MC8780 I had in my laoptop broke off - bugger. So after that I was very careful. A little micro soldering should fix it but I wouldn't recommend that to anyone - so if anyone os reading this - be careful with the aerial connectors. I did the upgrade fine and then reinserted the MC8775V into the W25. I did consider putting in the MC8780 but didn't go there - quit while I was ahead. So once reinserted it started and connected fine. I then reran the 11B upgrade which finished without issue - it was now 3am - time to stop. Next morning still running well with a consistent connection.
Well thought it might be helpful for someome.
November 29, 2008 at 3:08 AM

Lacó said…
Amazing what you did!

openeyes said…
Just wondered if you got any further with the SMS. I was even thinking of getting a linux developer to put together something that can run on the web interface - it would be really useful. But my next project will be getting a second modem working on the unit for the Optus 900 UMTS network using a Huawei E169. And hopefully next year I can replace the MC8775V with a MC8792V. Optus and virgin offer a Topless mobile plan which will be perfect for our small business. More next month when I have time.
December 2, 2008 at 9:45 AM

Lacó said…
I am using the SMS functionality to send me STOCK status every day via SMS (not big fun reading them these days) but it seems to work pretty well.

When you are ready to do anything with it, just write me and I will publish the latest code.

I was thinking to create a POP3/SMTP interface for the SMS, because after that basicly with any email client you can send/receive the SMS.
December 5, 2008 at 3:54 PM